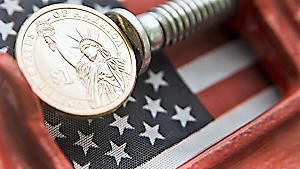 Administering and enforcing the tax code is no small task. In 2017, the IRS processed 245 million tax returns, collected $3.4 trillion in taxes, and issued refunds to over 120 million households.

So, how will the Tax Cuts and Jobs Act impact the IRS’s tax administrative duties, and, more specifically, how will the IRS adapt its mechanisms for closing the tax gap under the new laws?

The IRS has dedicated a significant amount of resources to better understanding taxpayer behavior and preferences. The Comprehensive Taxpayer Attitude Survey (CTAS) is one measure used to evaluate taxpayer attitudes and inform IRS efforts to improve taxpayer services.

The CTAS results for 2017 showed that the majority of taxpayers find cheating on their income taxes to be unacceptable and nearly all taxpayers responded that they believe it's their civic duty to pay their fair share of taxes. See charts below from the 2017 IRS Data Book. 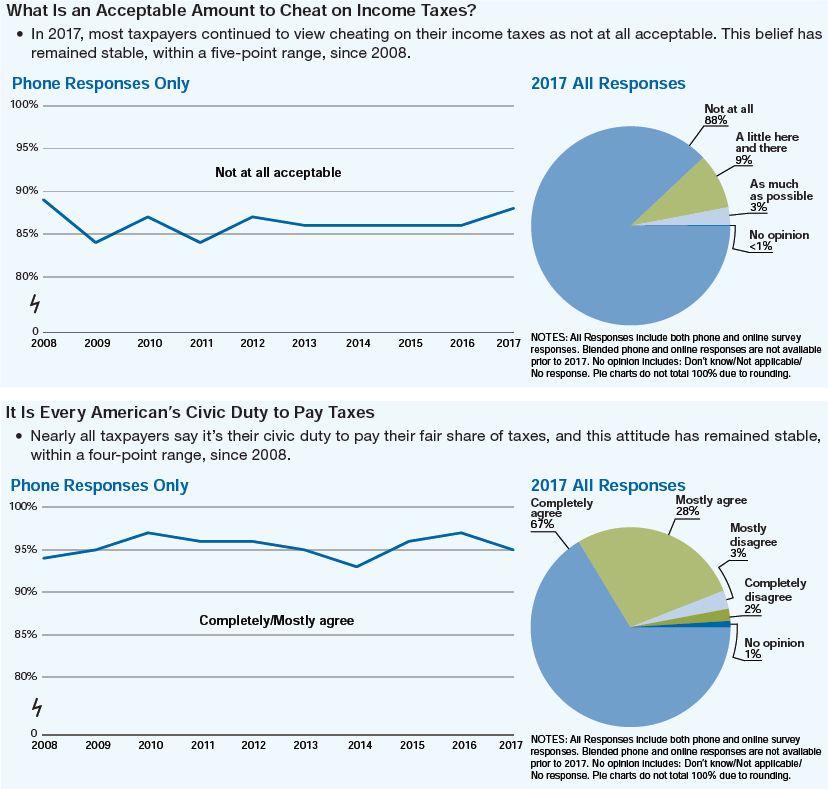 Despite these civic-minded virtues and government-friendly results, the IRS has estimated that the tax gap is around $450 billion each year. The tax gap is the difference between taxes paid and taxes owed.

Noncompliance is usually attributed to non-filing, underreporting, and underpayment. Taken as a whole, these components of noncompliance represent roughly 15% of the total tax liabilities each year.

The IRS uses several mechanisms to combat the tax gap, but the one most taxpayers fear is an IRS audit. Some are surprised to learn that the IRS only audits 1% of all returns filed each year. 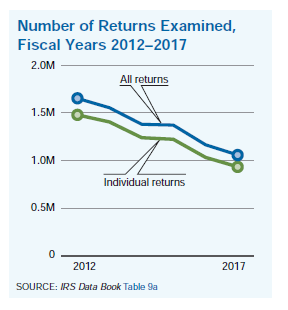 Selection is determined based on a discriminate index formula (DIF). The formula helps agents identify income that is often misreported.  For example, an individual income tax return with a Schedule C attached is more likely to be flagged than a return that only includes W-2 earnings.

The Tax Policy Center predicts the number of households itemizing their deductions will go from 46 million to 21 million under the new law.

Other practitioners argue that the incentive to create pass-through businesses, such as partnerships and sole proprietorships, in order to benefit from the new section 199A business deduction, will only contribute further to the tax gap. They note that the business income generated by these pass-through entities generally escapes withholding and information reporting—the category of income most often misreported.

The IRS will likely consider both arguments in developing mechanisms to close the tax gap under the new legislation. One approach may be devoting more resources to pass-through entity returns and fewer resources to returns that are subject to standard withholding and information reporting. Another approach may be reducing the number of corporate income tax audits and increasing the number of individual and partnership audits, thereby reversing the trend from recent years.

Whatever the IRS decides to do in the short-term, taxpayer data collected over the next few years will likely focus on the decrease in itemized filers relative to the increase in pass-through entities. These details can be used to refine the IRS’s DIF formula over the long-term, resulting in more strategic audits of income tax returns under the new law.